Day Six: "If it ever gets out how many puffins died during the making of this movie, I'm in big trouble..."

Beginning to think bears are frightfully under-represented this year after all.

British film starring Natalie Press as a Jewish girl trying to reconcile her estranged brother with her dying mother. 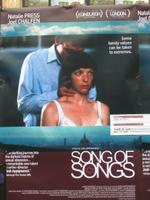 Worst film of the festival so far. My Summer of Love was one of my favourite films last year, so I was really excited to see Natalie Press's new film, even if it didn't exactly sound like a barrel of laughs. But it was just awful. Confusing, pretentious, badly acted (though not by Natalie) and just flat out dull. Even the quasi-incest scene towards the end couldn't liven it up. And I still don't understand the bit with the wig. My notes for the film just read "What. The. Fuck?" 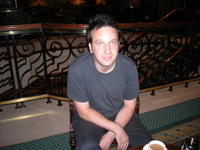 My ongoing struggle to contact The Big Issue Scotland continues - I was still trying to contact them to confirm the interviews for Guy X between interviewing the director and the star. Anyway, I'd enjoyed Metzstein's first film (Late Night Shopping) and was keen to interview him for Guy X. In person he's very chatty and enthusiastic and is clearly still tripping on the whole "great big train set" side of directing, most notable in his delight at having got to work with Michael Ironside. We talked a lot about his influences and about 70s movies in general, as well as M*A*S*H and Catch-22 - the two most obvious influences on Guy X. He didn't tell me the Puffin Wrangler story though - I had to get that from Biggsy.

Interview with Jason Biggs (or "Biggsy", as I call him)

Bloody nice chap, even if his taste in jumpers does leave a little to be desired. In person, like Metzstein, he's very likeable and chatty, but also quite serious, perhaps because he knows that Guy X is his first shot at a proper dramatic lead performance. I'd seen him before at the press conference for American Pie 3 and he had the room in stitches, so I was secretly a little disappointed that he wasn't making with the jokes. We talked about the film (and how he had to step in as a Puffin Wrangler - at least he knows he'll still have a future in show business if the acting doesn't work out), about the other members of the Pie cast (he's good friends with Eddie Kaye Thomas and Chris Klein but doesn't see Seann William Scott much) and about films in general - in particular we discovered a shared love of documentaries, so I bigged up "the whistling movie" as well as Sherman's March (the first classic that came into my head). He recommended both Winged Migration and the current box office hit March of the Penguins, so he obviously has an affinity for flightless aquatic birds. He's also acutely aware of his own strengths and weaknesses, as far as his career is concerned - he knows that he has a likeable 'everyman' quality that audiences warm to but he also knows that a lot is riding on Guy X in terms of his career potential in the future, at least as far as serious dramas are concerned. That said, it's clear his first love is comedy and if American Pie 4: The Next Generation gets the green light, I'm sure he'll be involved somewhere. 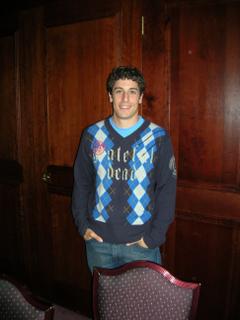 This was great fun. I've only recently acquired the digital camera, so I decided to tag along to the photocall - actually, I wasn't going to go, but when they said it was on the roof of the Balmoral Hotel, I changed my mind. Highlights from the press conference are as follows: Joss discussing the little girl inside him who allows him to write such great parts for women; my well-received question -answered by everyone - about what it was like to return to the set ("It was like someone had redecorated and made everything bigger"); and the following exchanges:

Adam: "I see the movie as a redemption for the show and a reaffirmation for ourselves and our characters."
Nathan: "I see it more as sweet, sweet revenge."

Joss: "I admit it - I'd let success go to my head, so after the show was cancelled, I just really felt I owed it to my cast to make it up to them somehow."
Nathan: "I remember the day you came to the set and told us the news, and I looked at you and thought, 'You've let us all down.' 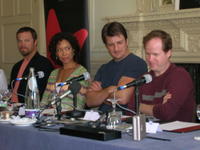 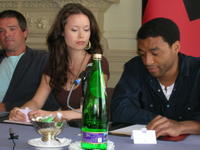 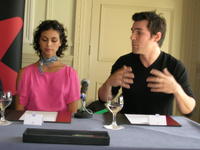 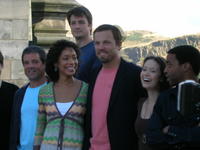 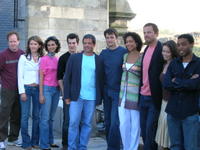 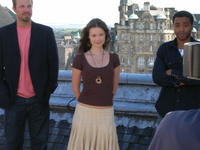 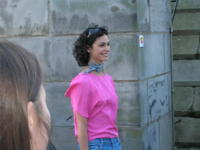 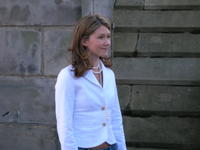 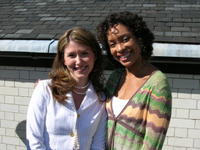 Low budget independent road movie about a guy and his girlfriend who drive to North Carolina to pick up a chair the guy has bought on e-Bay.

I saw this at the videotheque, which was a little annoying because a) the DVD kept sticking, b) I hadn't booked so had to change seats and keep one eye on the staff in case they kicked me off again, and c) I couldn't figure out how to make it fast-forward (it's a complicated double-push-and-hold procedure) so I ended up watching the first 7 minutes twice when they kicked me off the first time. Anyway, it was worth the effort - it's a very enjoyable little film about the relationship between the lead, his girlfriend and his very weird brother, who tags along on their trip after they stop by for a visit. It's one of those films that really sneaks up on you - I didn't realise how much I'd enjoyed it until later, when I was talking to friends about it. It does a couple of pretty brave things, in that none of the characters are especially likeable - the lead, in particular is a complete wanker and you wonder what his girlfriend sees in him. She's not blameless either, however, because she's actually a bit of a psycho. I also really wanted the brother to get the pounding he deserved. In short, this is very enjoyable and it's the second film I've ever seen (Gummo being the first) that's actually made me feel sorry for a chair. (I actually met the director the next night and had a long, interesting chat about the film, as well as telling him about The Big Sofa).

This was a huge amount of fun, even if the Serenity people didn't show up. The ticket said "The Gymnasium, Edinburgh Academy" and we thought that was some fancy-schmancy name for a club or a cocktail bar, but no, it actually was in a gymnasium, although they moved the gym ropes out of the way pretty sharpish after I tried to swing on them. The dancefloor was entertaining too, especially when A Certain London Journalist (who shall remain nameless) revealed some hitherto unsuspected Mad Dancing Skillz. Also, I took along a friend from FU and introduced her to Biggsy - that then became a sort of running joke and I ended up introducing him to pretty much everyone I bumped into. There was a good balance of new friends and old friends at the party, plus I made a couple of new ones and managed to have a conversation in Spanish at some point. I also met Alessandro Nivola, who's on the Edinburgh Jury this year and is utterly charming. We had a long conversation about films in general - he's in Junebug, which I'm looking forward to seeing tomorrow. Finally, That Natacha McElhone showed up (bit of a cheek, considering she wasn't around for press or the onstage Q&A) and I had a nice chat with her too - she's surprisingly unrubbish in real life. I came to the charitable conclusion that she's been miscast more than she really deserves, particularly when she explained that there had actually been a scene that explained her Iranian accent in Laurel Canyon, but that it had been axed, along with a relevant subplot. Note to future casting directors - let McElhone use her own accent!

My new friend Alessandro Nivola and That Nice Natacha McElhone: 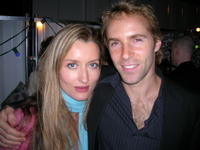 If it's not a spoiler, who's the bloke in the white tshirt in the Serenity lineup?

I think he's one of the producers.

Yes, he is. I forget his name.

Not famous enough for you, eh?

Hey, this blog is really good. I'm filling out my films I really need to see list every day. Thanks for the good work.

Oh Bugger, Song of Songs is my third last film of the fest. I chose it for the same reason you did too.

But then, you never know. Taste and all that.

So did you - as your post implies - ask Natascha McElhone why she is rubbish in all films?

I am SO jealous that you met Natascha! I've loved her since Solaris. Gosh, I'd do anything to atlk to her!

Thanks for the comment. I'm curious - how did you find the blog? I haven't updated it for ages!

Where did you find it? Interesting read film editing schools